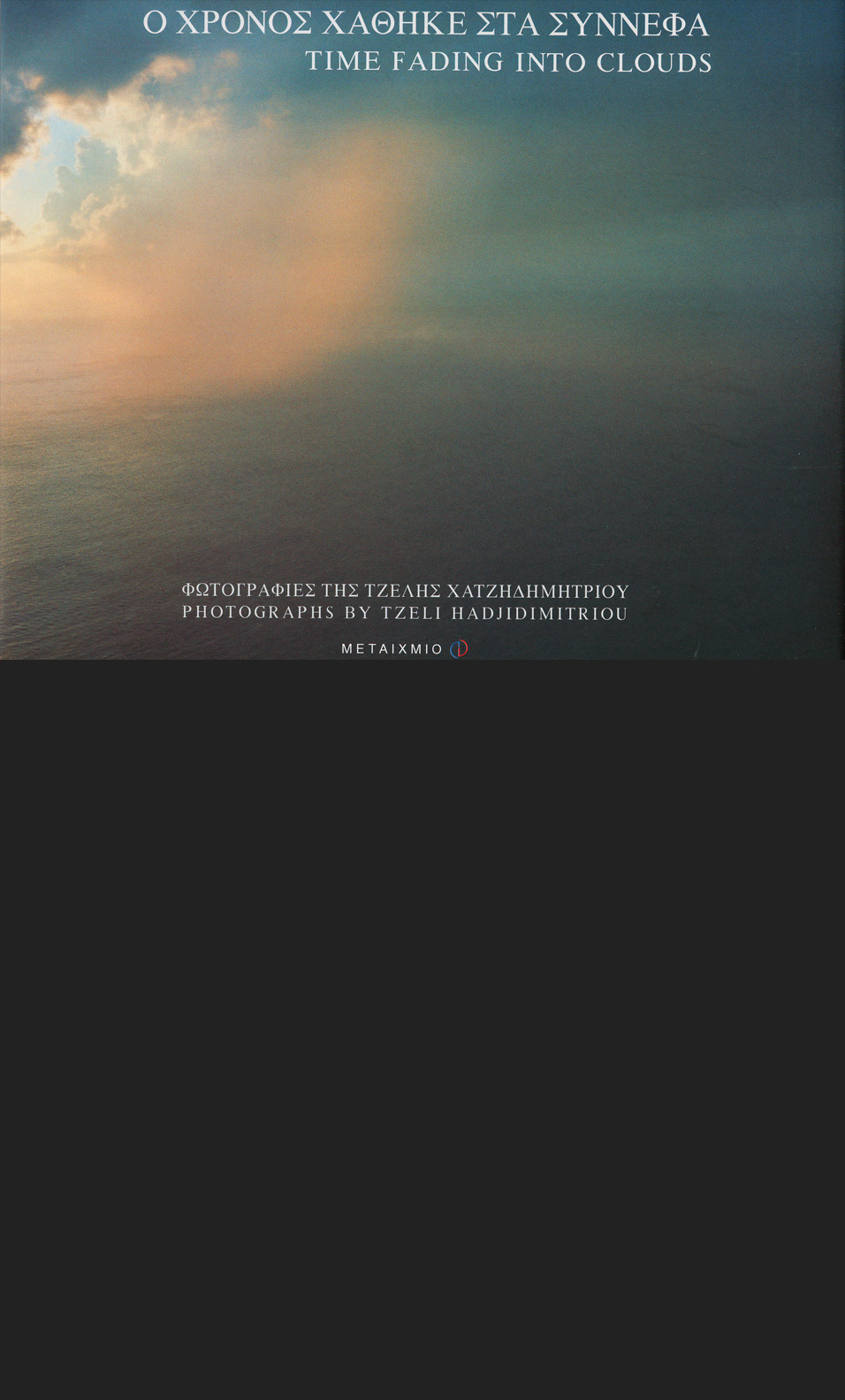 Tzeli Hadjidimitriou takes photographs of clouds as painters of the Renaissance, or El Greco depicted. She captures them, solitary and silent, on their odd journeys. It’ s as if a finger, a hand, will point the way. As if God, Zeus and Hermes will appear. She flies over towns, seas, villages and wastes. Like a bird she flies, like a gull, an eagle. When she stops to rest, she sees the waves, the sky mirrored in the saline waters. In rivers and dales. The Acropolis cloud-darkened, yet the Pentelic marble luminescent. You percieve the city’s sound with the ears.
Tzeli Hadjidimitriou dwells in cloundland. She is here, there and everywhere, and then she roams afar with the clouds. She is caught amid lightning and rain, and come spring, she returns to the quiescent earth. She walks like our National Poet, Dionysios Solomos, on the «charred ridge of Psara», or in woods like a deer. She roosts. She feeds on fruit and sap. She drinks water flowing through gullies or between rocks. She is the only leaving creature that knows how to read and write. She reaches the sea, but how is she to measure it? She remains silent, just before a cloudburst. She travels with the clouds, northwards, southwards, to the East and to the West. On her lonely voyage Phroexos and Elli, and the cranes of Ibycus accompany her. She views the towns from on high. Lights and ceaseless movement, without a break. She learns that rain is falling upon woods or towns, humid in daytime. And waits. She photographs the clouds: it’s like seeing the scenery in the National Opera House, the National Theater, or the window of a confectionary when you are overcome by hypoglycemia. She scares children, hypnotizes them. The sea, the rivers and the trees evaporate in the light of day, and the masses of clouds rise towards the sun. Then come rain, hail and snow. It loks like rain. « The cloud brought rain». The cloud passed on. « If only the clouds, the winds, the waves would carry me away…» Clouds travel without a passport, weightless, without luggage. She relieves us of our weight; up she lifts us, to the clouds, and observes us from a corner looking at what we had not seen all day in the towns we live in: the Earth. She believes that God, Sappho, Plato, Flery Dandonaki and Manos Hadjidakis hide among the clouds and write lyrics. She comes out to meet the low pressure forecast she heard on the radio. The distance is as far as the clouds. O clouds take me with you on your travels.

Tzeli Hadjidimitriou takes photographs of Turkish baths in her native island of Lesvos, entrances of blocks of flats, Athenian houses of the 1930’s, and empty coffee houses, without visitors. As before the earthquake, the flight, death, absence, drought and Pompeii, so in this album she photographs clouds, having her feet on the ground. No winged thing, no animal backs her. Only Chais. Silence. The Unknown.